Calling something gossip is a convenient way to ignore less dominant voices, trivialize conversations or demands, and maintain the status quo of power relations and norms. But gossip also carries productive potential. The platform GOSSIP GOSSIP GOSSIP engages with gossip as a queer strategy and tool of female knowledge production. For gossip is inherently an ephemeral queer practice: a queer worldmaking and – paraphrasing Hubert Fichte – an inauthentic, indirect language. A language of solidarity (and with it an archive of oral stories) that can only be fully understood and read by those within the sphere – and to some degree by its allies.

GOSSIP GOSSIP GOSSIP is an ongoing platform and series of events and exhibitions in Berlin’s urban space conceived and curated by Anja Lückenkemper and Sandra Teitge.

In 2022 GOSSIP GOSSIP GOSSIP will present a five-part series of performances, exhibitions and artistic activations under the title "The Devil's Radio" at and together with various locations and initiatives dispersed all over the city. The details and dates of the events will be announced in timely manner.

Stories, Bodies, and Ecstasis is the starting point for Zuzanna Czebatul, FRZNTE, Mazlum Nergiz, Cemile Sahin and Leyla Yenirce to create a multi-voiced literary, musical, installative and performative storytelling about kinship, gender-based power structures, solidarity and gossip. Stories, Bodies, and Ecstasis takes up this understanding and considers gossip as a queer and feminist (counter-) strategy to an existing norm that feeds on multivocality and generates solidarity through (temporary) group formation.

Stories, Bodies, and Ecstasis is the fourth of five parts of the series The Devil's Radio, funded by the Hauptstadtkulturfonds.

Meditations, Sounds, and Devotions is a performative weekend that rehearses an altered understanding of gossip – as the empowering experience of a (temporary) group. Silvia Federici once located the origins of the word gossip as meaning "the spiritual association with 'kin'" and describes how close communities of women have traditionally been a source of strength for the individual and the group.

With contributions by Moriah Evans, Agnese Menguzzato, and Zora Mann, Meditations, Sounds, and Devotions invites the public to listen, meditate, and observe together in order to experience gossip as a personal yet collective exercise that produces not only trust but shared knowledges, stories, and history(s).

Meditations, Sounds, and Devotions is the third of five parts of the series The Devil's Radio, funded by the Hauptstadtkulturfonds.

Silvia Federici locates the origins of the word gossip as meaning "the spiritual association with 'kin'" and describes how close communities of women have traditionally been a source of strength. The pejorative understanding of gossip is a strategy that accompanied and contributed to the deterioration of women's social status: Already in the 16th century, the accusation of being a gossip (read: a witch!) became a reason for the persecution and punishment of women. At that time, gossip went from being a word of friendship and affection to a word of denigration and ridicule. How can we return gossip to its roots today or use it as a strategy to transform exclusion into community, alliance and friendship?

The works of COVEN BERLIN, Zoë Claire Miller, and Lauryn Youden, feed off an understanding of gossip as the solidarity that implies and generates (female) friendship. gossip is here an (ancient) form of female knowledge production. The multi-part performative evening Witches, Rituals, and Healing explores gossip as a shared ritual.
All events are accessible for wheelchair users.

Witches, Rituals, and Healing is the second of five parts of the series The Devil's Radio, funded by the Hauptstadtkulturfonds.

The term gossip evokes images of glossy magazines, schoolyard dramas, the chitchat of afternoon coffee dates with neighbors or amongst mothers. gossip has a bad reputation; not for nothing did George Harrison refer to gossip as „the devil‘s radio“. But gossip is also activism; it is an ancient tool of female knowledge production. And while therefore often political, gossip can also be fun, ferocious and seductive. Fakes, Fictions, and Forensics questions perceived normality(s) in this context and focuses on female identities – on the fakes and fictions, realities and perceptions that make it up. The works of Anna Ehrenstein, Nora Heinisch, Natalie Paneng, and Franziska Pierwoss develop a new understanding of gossip, to consider it not as “empty talk“ but as emancipatory reappropriation and cultural learning. As a powerful means of communicating information about rules of conduct, female (self-)presentation within the discourse around feminism and societal norms with subversive potential. In this reading, gossip strengthens bonds, shares knowledge and creates a multiplicity of female identities.

Fakes, Fictions, and Forensics is the first of five parts of the series The Devil’s Radio, funded by the Hauptstadtkulturfonds.

Queerness, writes José Esteban Muñoz in Ephemera as Evidence, is often transmitted in secret: "Instead of being clearly available as visible evidence, queerness has instead existed as innuendo, gossip, fleeting moments, and performances (...)." Appropriating the fleeting and implicating strategies of gossip allows those who are part of this sphere to interact with each other – while it evaporates when in contact with non-queer otherness. gossip, fleeting moments, and performances, act 2 of the research platform GOSSIP GOSSIP GOSSIP, places queer strategies in a series of video works in the public space along the commercialized Ku'damm – during the (shopping mad) pre-Christmas season –, and with them the "sousentendus, alienations, exaggerations, ironies, travesties" (Fichte) that characterize queer language.
The artists Jasmina Al-Qaisi, Samantha Bohatsch, Anna Ehrenstein, Laure Prouvost, and Roseline Rannoch deal with gossip in up to 14 simultaneous vitrines that are otherwise reserved for advertising – expanded by a sonic activation in public space by Banu Çiçek Tülü and an audio tour by Flaneur Magazine. They all use the hidden and subversive strategies of gossip, which can be similar to the strategies of advertising, thus providing ephemeral evidence of affect, sexuality, and gender and interrupting the otherwise conventional and normative flow of advertising presented in the vitrines along Ku'damm.

For Gossip, Scandal and Good Manners, artists Samantha Bohatsch, Pêdra Costa and Özlem Özgül Dündar explore gossip as a queer strategy and tool of female knowledge production on three billboards and through three performative activations. Calling something gossip is a convenient way of ignoring less dominant voices, trivialising conversations or demands and maintaining the status quo of power relations and norms. But gossip also carries productive potentials and is an effective means of conveying information and (temporarily) grouping peers to reflect on themselves and produce knowledge about their own history(s).  By using artistic and subversive modi operandi of gossip – 3 posters and 3 performative activations – the project Gossip, Scandal and Good Manners aims to show a joint counter-strategy characterised by diversity, fluidity and intersectionality. 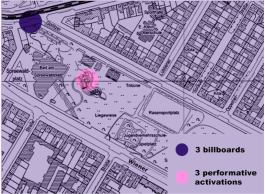