Jasmina Al-Qaisi creates narratives and sentences that reverberate like earworms in the listener's or reader's head, nestle there and function like a portal. For the exhibition gossip, fleeting moments, and performances Al Qaisi developed a video text in collaboration with interdisciplinary artist Gabriella Torres-Ferrer, whose work considers futurability, new digital epistemologies and subverting hegemonic narratives; power dynamics and means of exchange and production in a globalized networked society.

"The video text shows remains of a wasteland of perception where accelerated communication slows down: The phone watching and being watched is a workplace where the user is squeezed in dissidence to both productivity and consumption, translating the world.”

The result is an assemblage of images that are associative, unreal, unmanageable, and thus fascinating and idiosyncratic in format and content. Presenting, among others, screen captures, moving pictures with fingers and filmed screens, the video text makes reference to the word “story”, or rather, its absence. 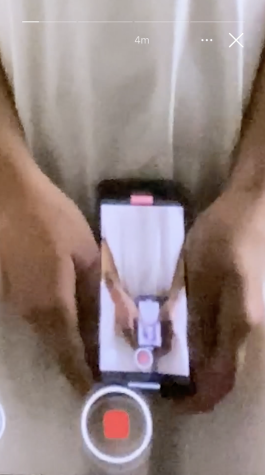 Jasmina Al-Qaisi is a writer for voice and paper speaking the language of question marks. She appears sometimes in other forms: as a walking scientist, the schnelle musikalische hilfe service, or as the only agent for the self-entitled-self-entitlement-office. Most often she makes waves on various radios and is a member of the sound interested artist group Research and Waves.