In 2021 when we could not touch each other, were buried behind our screens, and distanced from the visceral and the elemental, COVEN BERLIN declared the YEAR OF THE BOG:

[...] The Bog is a sort of membrane between the forest and the wetland. A transition area, an open-ended gathering of living and dead matter. Bogs are queer ecosystems. Their cool and wet environment preserves many futures under a single slimy surface, without presumption of a seamlessly harmonious collaboration. Because they are often small, rank, have blurred borders, and don’t meet the traditional definition of fertile, bogs’ role in the biosphere has been deemed trivial. They are fermentation pits for earth’s residue, including toxic runoff from capitalist extraction and urbanisation. Their skills sets, like preservation and decantation, are deemed less valuable than growth and production, and for that they are desecrated. But even if paved over, as a mushroom says in a Tumblr meme, “you cannot kill me in a way that matters.” Their metabolic changes happen over thousands of years – an unimaginable temporality, swallowing human history in a single burble. Bogs ‘make time’ for us, letting us make time for each other.

Our bog is an ode to the future, futures that can hold multiple kinds of life and spirit, without requirement, condition, sense, or logic, especially in dank and cold times. Reach out. Reach in. Get bogged down with us.

YEAR OF THE BOG 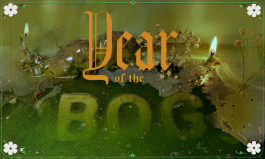 As a group, COVEN BERLIN wants to create an open sphere to defy systemic violence and inequality, and is devoted to emotional processing, collective healing, political reassessment, paying fairly, and supportive time management strategies. The collective nurtures cultural work, in Berlin and online, in the form of embodied affective research and digital hybrid curatorial approaches, always with a breath of humor.