“For me, a feminist is someone who advocates for the civil and social rights and liberties of all people, regardless of their gender; anyone who believes that women should have the same choices and opportunities as men when it comes to education and employment, their bodies and their lifestyles.”
Kim Kardashian

Many struggle to understand Kim Kardashian as a feminist, herself included who, in fact, does not believe in the label ‘feminist’. At the same time, Kim is undoubtedly one of the most powerful female figures in social media; her Instagram account counts over 300 million followers, a global reach that is incredibly influential. And this influence has long surpassed the online sphere: Kim enjoys economical success – ranking in the Forbes billionaires list –, she was invited to speak on prison reform in the Trump White House and has, together with her mother, strategically built up a matriarchal clan structure, through which she subtly but firmly controls most other family members. Still, she remains an ambivalent, if not controversial female figure. Not unlike Ivanka Trump’s, Kim’s “brand” of feminism is regularly criticized as capitalist pseudo-feminism, mainly aimed at selling woman products – rather than ideas. In addition to this claim, the affinity of Kim and her sisters to share sexy selfies –to sell even more products–, led to feminist-identifying actor Jameela Jamil calling the Kardashians “double agents for the patriarchy.”

Against these seemingly unbridgeable binaries, Franziska Pierwoss new work Studying in the Sun traces the ambivalence of Kim Kardashian’s multifaceted persona: To the world, Kim confidently (self-)presents simultaneously as a sex symbol, business woman, and traditional mother figure. Concurrently, Kim is even pursuing a career in law, which (some think) might lead to future political engagements. Successful or not in this ambition, Kim and her family, the famous Kardashians, represent the long outdated but still prevailing US-American (capitalist) promise of economic and therefore social success: if you work hard enough you can “make” it. On Instagram, Kim and her sisters make “working hard” certainly seem incredibly leisurely and fun. It is this promise that makes Kim a role model for millions of young women, not only in the United States, while she simultaneously remains one of the most scrutinized celebrities.

Studying in the Sun 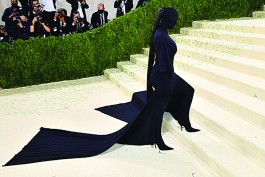 Franziska Pierwoss lives and works in Berlin as an artist in the fields of performance and installation. In her work, she stages site-specific installations and prompts unexpected encounters in which radical forms of dialogue occur between actors with different standpoints and backgrounds. Focussing on durational performance and collaborative practices, Franziska Pierwoss develops situations of engagement, in which the personal and political boundaries of participants, as well as institutions, are called into question.

She studied at the Hochschule für Grafik und Buchkunst Leipzig and at the Lebanese University Beirut. Her work has recently been shown at Paco Imperial, Rio de Janeiro, Jameel Arts Centre, Dubai and Halle 14, Leipzig (all 2022). Pierwoss has been staging dinner performances at MUAC, Mexico City (2017), Sharjah Biennial 13, Beirut (2017), and the Fast Forward Festival, Athens (2019). Franziska also trained as a transformation manager and has been developing tools to support ecologically sustainable working methods in arts & culture.