A room with a bowl (Teaser) 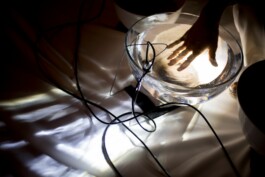 Tomoko Sauvage is a musician and sound artist. Her research is grounded in live-performance practices that embrace the unpredictable dynamics of materials. Incorporating ritualistic gestures, she playfully improvises with environments, using chance as a compositional method. Her performances and installations have been presented at RIBOCA, V&A Museum, Manifesta, Roskilde Festival, Sharjah Art Foundation, Centre Pompidou Metz and Nyege Nyege Festival, among others.
Born and raised in Yokohama, Japan, Sauvage moved to Paris in 2003 after studying jazz piano in New York. Through listening to Alice Coltrane and Terry Riley, she became interested in Indian music and studied improvisation of Hindustani music. In 2006, she attended a concert of Aanayampatti Ganesan, a virtuoso of Jalatharangam – the traditional Carnatic music instrument with water-filled porcelain bowls. Fascinated by the simplicity of its device and sonority, Sauvage immediately started to hit China bowls with chopsticks in her kitchen. Soon her desire of immersing herself in the water engendered the idea of using an underwater microphone and led to the birth of the electro-aquatic instrument.

Alexandre Finkelsztajn (b. 1995, Paris) is an artist based in L’Île-Saint-Denis. His practice involves poetry, experimental music, and performances. Experimenting through fictional and documentary gestures, his work is made of sound and text materials, unsettled by resonances, superimpositions, silence and noise. Interested by intimacy and the survival of ancient beliefs, voices and gestures, he questions the limits of what can be written and read, heard or said.